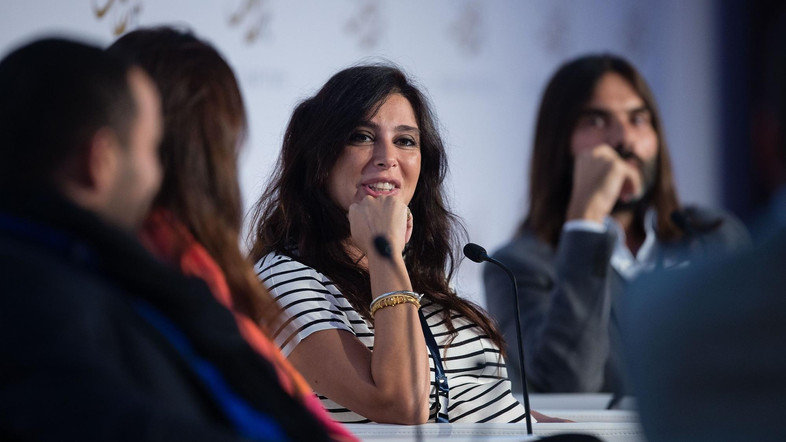 Arab cinema has undergone a sea change, with the loss of great actors like Omar al-Sharif and Noor al-Sharif. Some, such as the Egyptian producer Karim Amer, lament the lack of heroic figures in Arab cinema, citing that as one of the possible reasons for the popularity of ISIS on-line videos.

Amer’s wife, Jehane Noujaim, collaborated with him in the filming of the Oscar-nominated documentary “The Square,” based on the Egyptian revolution of 2011. As part of a panel discussion in Abu Dhabi, at the Beirut Institute Summit, director Noujaim commented: “We in the Arab region have a rich history in storytelling. Yet somehow we are at a point in time where our Arab story is not being told correctly, especially by Arabs themselves.”

Meanwhile, Hollywood’s portrayal of Arabs on television and cinema has received substantial criticism for reinforcing negative Arab stereotypes with programs such as “Homeland” and “Tyrant”.
In the same panel discussion the composer – and husband of noted Lebanese actress and film director Nadine Labaki – Khaled Mouzanar mentioned that valuable lessons might be learned from older generations about the powerful role of the arts in bridging political divides. Mouzanar spoke of the unifying power of performances by Egypt’s renowned and versatile musician and actress Umm Kalthoum. At the same time, Labaki commented that filmmaking was, now more than ever, a storytelling medium available to anyone with a smartphone.

As reported by Ismaeel Naar of Al Arabiya News the panel also spoke about how ISIS had managed not only to create hi-quality aesthetic films but had also translated them into English as well as several European languages so that they were accessible to an international audience.

Producer Karim Amer placed the responsibility for reclaiming the Arab story squarely on the shoulders of those in the Arab film industry and the political structure behind it, remarking:

“We can’t blame anybody but ourselves, and that’s the reality we’re living in. As long we stay like this, our stories will be told by ISIS and foreign powers… We have to believe that we can be the authors of our stories and I do believe that artists, politicians and civil servants are responsible to create a space for that.”

Actress and director Nadine Labaki – currently working on a script that revolves around children’s rights – thinks that there’s still an opportunity for Arabs to present a more realistic, positive image of their own world, remarking that cinema is a powerful and non-violent weapon, able to communicate a synchronized vision to a large and diverse audience.

Meanwhile, following their success with “The Square” the director/producer team of Noujaim and Amer have two new projects in the works: a two-part series that tells the stories of the mothers of foreign fighters who have joined ISIS and “Breadwinner”, an animated film, being made with Angelina Jolie.