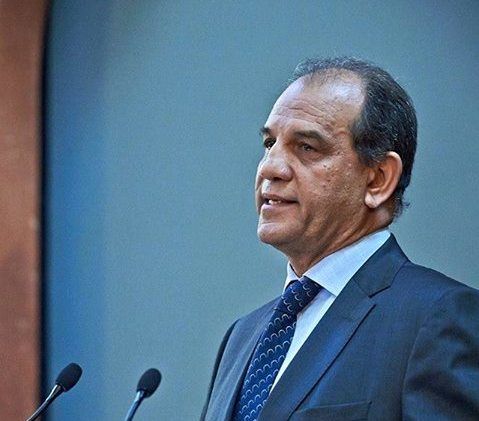 Mahmood Daylami is General Secretary of the Gulf Aluminium Council (GAC), the major organization representing the aluminium industry in the Gulf countries. It is a continuously developing sector and the delicate role of Mr. Daylami is to ensure coordination among associated enterprises in order to promote the sector’s optimal growth.

In recent years, the global aluminium industry has experienced momentous changes, from old Europe-North America world the production center has shifted eastwards. China has become the largest producer and consumer of light metal in the world, Europe is declining in primary production due to high energy costs, the Middle East stands as a candidate for becoming one of the main production poles of light metal in the world.
In many other areas of the globe, aluminium is taking its first steps as best material for the development of local economies.
Consequently, numerous topics are being debated, some of which will be discussed with the General Secretary of Gulf Aluminium Council.

Mr. Daylami, your experience in aluminum started in Bahrain, which is a special country and represents a very special point of view. Having worked in Bahrain, you’ve had to work harder and so have more experience than you would have had you been in another country...

Working in Bahrain has not been difficult in fact it has been a privilege. Aluminium industry in the Gulf started from Bahrain which was the beginning of industrial diversification away from oil industry, working at Aluminium Bahrain provided an opportunity to learn and later to contribute to continuous development and expansion program.

So you’re now in your new function to coordinate aluminum companies in the Gulf. What do you think are the GAC’s future needs?

GAC, Gulf Aluminium Council, is a young organization but has the full support and contribution from very experienced people from all over the Gulf which made it to grow in a very short period to be well organized and respected as a body representing the aluminium industry in the Gulf. Our aim is to improve the coordination among the smelters and the downstream to benefit from the synergy that exist among them. We are not there yet but there are positive results and benefits from what has been achieved. Also our aim is to bring the industry and suppliers, customers and technology providers that have aluminium business interest in the Gulf closer for mutual business benefits and we have made very good progress on that.

Do you have some common programs, such as for training?

We have many programs, but we avoid getting involved on the off the shelf training program. We develop very specific trainings for specific issues that are not commonly provided. In fact the smelters spend over US$ 20 million every year on training and development they all have their own training centers with specialist. GAC complement such activity but we are not replacement.

It is a little different from a European association where they are mainly lobbying for legislation; we don’t do that. We provide forum to help improve efficiency, safety, environmental standards, human resource development and expanding business relationships.

In my opinion the GAC members are more like brothers.

Not necessarily, they compete in many areas, but also cooperate where needed, such cooperation’s have been extremely useful in recent years.

Yes but perhaps they are more likely to share information about a bad supplier or a good one.

Yes they can tell each other that to certain extent, and our future approach is to have common suppliers to address common issues collectively so that positive and negative matters are brought to light for the benefit of all including the suppliers”.

I visited the OARC project built by FATA in Sohar and I found that there was a lot of experience, but this experience could not have created this result without common cooperation on things like environmental issues. I also discussed about how Qatar’s territory is quite small in comparison to Saudi Arabia or the UAE but they have been able to replicate some of their successful businesses outside such as in the field of telecommunications. I don’t think it’s possible to do the same in aluminum because it’s based on on-site production and very specialized worker training. I do feel that the experience of the GAC is unique, do you feel that your companies have a larger, political scope?

The Gulf region is developing fast in many fields, industrialization is one of them. Gulf countries have energy, capital and aluminium know how. The important ingredient to build aluminium industry. Today the DX Aluminium Technology by Dubal is the most advanced in the world in all the aluminium process parameters and Emal is a good example.

In March 2014 you have organized an important meeting in Brussels to illustrate to the world of politics and industry the huge development of light metal production in the Middle East and the interesting opportunities for the European industry to collaborate with mutual advantages; you spoke too about . the problem of the EU raw aluminium duty not yet resolved. Do you think that during your secretariat it can be resolved?

I don’t know when it will be resolved, but what I know is that it needs to be resolved and it should be by the European not us.
Europe is now paying more for its raw material when it can pay less, because of tariff which was introduced more than 20 years ago. This old policy need to be updated to meet current situation. Europe is importing more than 50% of its aluminium needed, why make the consumer pay more and make downstream uncompetitive. There must be a change. If Europe need to protect employment and business, this is an area they need to be seriously considered”.

In your opinion, is FACE , the Federation of Aluminium Consumers in Europe, functioning as this voice?

Yes, I think that FACE is a good organization, they are active, they represent downstream businesses, and they have had successes, now circumstances have changed and it is necessary however there should be change in approach than before to produce different results. What that approach should be, I should leave that to FACE to decide. FACE can be much more powerful, much more dynamic, much bigger, but it needs support. It needs support from the industry, from Europe. And it’s not the money; it’s getting the people to contribute and support their activities for the benefit of the European Aluminium industry, especially the downstream and the consumers. FACE represents the consumers of aluminium in Europe, and it’s for them to convince the policy makers that the downstream side is at a disadvantage. These are the fact. At the moment the EU aluminium primary producers have the upper hand because they have controlling role in the European associations and it is possible that they direct what to be done. I think the downstream should take more action, have more of a voice within the European associations to bring about that change.
My personal opinion is that there is not enough voice coming from downstream, not strong enough to tell the policymakers that the industry is sinking. If you put the number of the EU downstream aluminium people, whether it’s the number of employees or the number of companies, they represent the largest portion of Aluminium industry in Europe.
The point is that they are scattered, they are small-medium businesses, they are private and family owned and they do not have dedicated people in the big organizations to do this job. The SME can’t afford to do the same thing as the big producers that have a dedicated department just to do the lobbying for them and public relations. The small companies can’t afford that, that’s where the weakness is. The only way they can do it is by being together and they are not as necessary.

At the conclusion of this very interesting discussion, for me there is the fact that we have to join the forces of southern Europe with the Arab countries because these new markets can be more powerful than before working together and looking the best synergy of characteristics, think of the knowledge, the know-how, the experience and the best practices in aluminium transformations and downstream.
Made in Italy, for example, can have a big impact on the construction of the new cities in Arab countries, for example the 12 airports just in Saudi Arabia, about 10 metro lines in different countries, 2.500 km of railways. It’s a market for us. For this reason we can find a way to agree. Otherwise there will be Americans, Koreans, Chinese, Indians and they will close the market to Europe also because the different rules of access to the raw material. You are totally right when you say: Why don’t you combine your actions or your interests to put pressure and influence the decision making process. I’m very grateful for this conversation.