Connecting With the Landscape 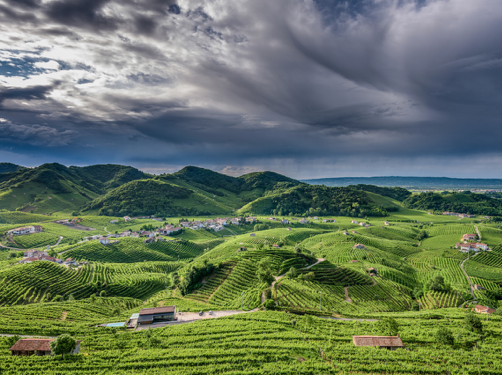 By Suroopa Chatterjee and Bonnie McClellan

A visit to the Prosecco wine region in Veneto, Italy, would certainly make a tour of Venice and its surroundings complete. This area takes pride and joy in sharing its traditions, interacting and exchanging experiences with the wine enthusiasts who visit it.

The care and attention that goes into making this wine also shows results. The Prosecco Superiore DOCG produced in Conegliano Valdobbiadene in 2019 was valued at roughly 524.6 million Euros. DOCG Prosecco is certainly appreciated in Italy but it’s also valued in the more than 130 countries to which 43.7% of the production from this zone is exported.

Conegliano Valdobbiadene boasts 182 wineries that produced over 92 million bottles in 2018. This wine growing region, with its rolling hills and mild climate, was declared a UNESCO World Heritage Site in 2019.

For those less expert in the nuances of wine, you will often see DOC and DOCG on wine labels. These indicate the quality and classification of wines in Italy where the wine regulations place DOCG at the top of the quality designations.

DOCG stands for Denomination of Controlled and Guaranteed Origin while DOC stands for  Denomination of Controlled Origin.
The practice of designating wines began in the early 1960s and the regulations take several parameters into account: production areas, wine color, permitted grape varieties, correct proportions, styles of wine, and levels of alcohol to name a few.

The DOCG wine designation was added in 1980 to introduce a top classification of Italian wines as many felt the DOC label was a bit liberal in its gradings. DOCG regulations are more restrictive where permitted grape yields are far lower and wines have to undergo technical analysis and tasting by officials from the Ministry of Agriculture.

In this area, a special initiative focuses on the enhancement of a precious legacy: “I’m an architect by profession. My grandparents’ home and vineyards happened to be in that part of the Veneto region famous for its Prosecco: Valdobbiadene,” says Rosy Gatto, a prosecco producer in the area.

“In 2015, my life took a new path. I decided to take over the management of these DOCG hillside vineyards when I inherited them from my grandparents.”
Rosy tells how she developed her business: “The bottles produced by my vineyards bear the name: ‘Dei Vescovi’, which I chose for the brand, because it evokes the nickname of my mother’s family.”

But no less important is the location of one of her two vineyards, which houses the cellar and the ancient stone dwelling of her paternal great-grandparents, where she welcomes visitors and friends. This is where the story of the two families intersects, together with many historic traces of this little town.

“My two vineyards cover 2000 and 3000 square meters respectively and date back to the early 1960s. Considering that they are more than 50 years old, they are called ‘historic’ vineyards and still maintain the typical characteristics of a traditional vineyard: a variety of fruit trees, mulberries along the rows, and even the willow from which slender withes are cut to tie up the vines.”

In addition to their authentic, natural beauty, these historic hillside vineyards are much prized because the vines that were planted and the grafts that were made were done in such a way that they are much more resistant than modern ones and they offer far better grapes which feature more complete organoleptic qualities.

“Since I decided to transform our grapes into wine, I have followed the cultivation and maintenance systems aimed at improving the resistance of the vines through precision pruning methods that respect the vine’s physiology. I have reduced the use of pesticides to a minimum and eliminated the use of desiccants. All processes are done by hand, including the harvest.”

Visitors will also enjoy soaking in the natural history and architecture of this wonderfully scenic region.
Combined with a wine tour, it is a journey that will be appreciated, savored and be a source of enduring pleasure.