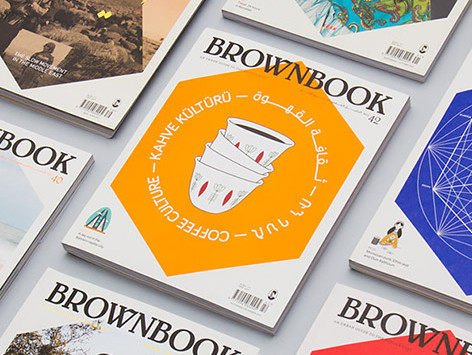 Rashid and Ahmed bin Shabib take on regional stereotypes with a positive approach.

Rashid and Ahmed bin Shabib are the twin brothers who conceived the highly successful Brownbook, a bimonthly magazine focused on contemporary life in the Middle East and North Africa. In a recent interview for the FvF website they gave a detailed account of how and why Brownbook came about. Headquartered in Dubai, they report on cultures not covered in Western media with the broader aim of addressing the challenges of modern identities in the Gulf area and how that is lived out both in the countries of the region and in the Arabian diaspora.

Rashid and Ahmed were born and raised in Dubai; they studied economics and property development in the U.S. and earned undergraduate and master’s degrees in the UK. They note that in the mid-1990s Dubai changed from a quiet small town to a more open, international city. This shift brought new influences and in the FvF interview they state there is still: “tension between adapting and adopting in the Asian context.” Continuing: “We need to start looking at our identity more, to try to adapt it in the way we build our cities…to make it more contemporary.”

In trying to map this identify, Brownbook was born. Initiated ten years ago, it formed part of an exploration of Dubai, a city with a strong influence on Middle Eastern culture where only 7% of the population is indigenous or native. Despite Dubai’s rich heritage there is a sense that much is being cast aside to make way for the new. The bin Shabib brothers want to take a fresh view of the language, culture, etiquette, and ethics that have shaped the culture around them.

According to FvF, they first started by using syndicated stories with subject matter that made sense to for their audience, and later began doing their own research, taking the initiative to send their own reporters and photographers to gather interesting stories from throughout the region. The publishing scene in the Gulf states has been well established since the 1970s and one of the challenges the brothers face is having only a single magazine (and no commercial publications) with approximately 50 contributors from all over the region working together to find stories that confront the readers’ stereotypes and inspire them to rethink their beliefs and important issues. Why? Rashid and Ahmed told FvF interviewer Marc Yates:

“It’s very simple: we’re not satisfied with the news that’s been published and the current dialog around the Middle East. Brownbook is an extension of a format of research that we’re constantly looking at. Traditional media is constantly stereotyping a region that is challenged with conflict, social and political tensions. The Middle East is broader. There are issues, but we move on, people still study and live life here.”

But how do they challenge both internal and external misconceptions about the Middle East, especially on ‘hot button’ topics? Brownbook’s editorial approach aims at maintaining political neutrality and challenging sensitive topics in a progressive way. They note that in the Middle East there is a regional etiquette that precludes the use of the western media’s ‘whistle-blowing’ approach and favors communicating ideas with positive rhetoric, promoting a given stance rather than tearing down the opposition.

In order to reach the widest possible audience – including a substantial population in the Middle Eastern diaspora –, Brownbook is published in English, with supplements in Arabic and French. Although the magazine is important, the brother’s feel that the broader practice of researching, finding primary sources and archiving information is even more valuable. This attitude is reflected in a multiplicity of endeavors that they manage above and beyond the publication: research, education, exhibitions and even urban renewal projects keep them busy and focused on all the work yet to be done.