Hyperloop, from concept to reality 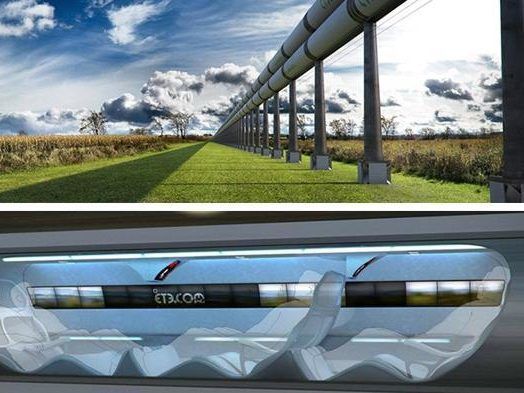 Commissioned by the Dubai Government for Expo 2020 to connect Dubai and Abu Dhabi airports.

Chosen for the Dubai project after a week of negotiations, Los Angeles-based Hyperloop Transportation Technologies (sponsored by Elon Musk), is now working to make supersonic transport a reality. In a recent article by the Corriere Della Sera, the start-up’s vice president and co-founder, Bibop G. Gresta explains: “It’s a race against time to build it in 4 years.” On Tuesday, February 23, the company signed an agreement in the UAE for a use analysis study and for the building of the first full scale Hyperloop commissioned the Dubai Government for Expo 2020 in order to connect Dubai’s new airport with that of Abu Dhabi. A grand project, if it will be ready on time, and not an inexpensive one either; the project’s estimated costs vary from 10 to 20 million euros per kilometer. However, it could also revolutionize the transportation world: cutting the travel time between say, Rome and Milan, to just 25 minutes.

In a few short months, Hyperloop will begin construction of an 8 km test track in Quay Valley, California. To put that in context, with a variable infrastructure cost of between 10 and 20 million dollars per mile, the Hyperloop is still more cost effective than an Amtrak line with costs of around $34.6 million per mile. But, how does it work? The basic idea is of a ‘capsule’ – about the size of a small airplane cabin – travelling within a steel tube. “We take a capsule with 28 passengers, put it in a tube and take out all of the air. Within the tube there is a passive levitation system using opposing magnets,” explains Gresta, and “the magnetic propulsion rotors turn on a horizontal axis.” The tube is covered with solar panels, and uses wind and geothermal as well as kinetic energy.

The Terni born entrepreneur – who has worked to involve several Italian companies in the project: from the European Institute of Design to Vicenza’s Maffeis Engineering; in addition 52 of Hyperloop’s 520 employees are Italian – also points out that the Hyperloop doesn’t need rails, only pylons, that the elevated tube will not be in conflict with the old railway network and that it utilizes the most technologically advanced construction technologies, rendering the Hyperloop highly earthquake resistant. He continues, “After two and a half years of research we are ready, we have already requested permission to begin work. In a maximum 36 months we will deliver the first passenger.”

All of this high technology is surprisingly not so new, the first prototype was created in New York in 1870 was followed up by various studies. In 1969 the U.S. government circulated a study on 4 new methods of transport development, two of which were conceptually similar to the Hyperloop. Gresta, already working in the new technology field in the ‘90s founding various start-ups like Bibop and Digital Magics, decided to move to Los Angeles where he was eventually approached by Dirk Ahlborn who talked to him about crowdsourcing the Hyperloop project. “At first I was hesitant, but then I read the comments of the experts from NASA, Lockheed Martin, and many other companies and they all agreed: ‘the project is feasible’. I was convinced,” says Gresta. Over the past eight months he’s traveled through 52 countries, including the UAE, and says that the list of possible buyers, including China and India, is long. The future of transport will certainly focus on renewable energy and will include a futuristic, computer guided train, but above all, tracks are going become a thing of the past.