Machiavelli’s portrait rediscovered on the Internet 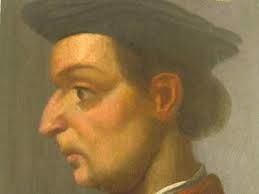 A previously unknown and unpublished portrait stored in the United States could reopen the debate regarding Niccolo Machiavelli’s physical appearance. A portrait that, based on the attribution of art historian Claudius Strinati, would have been produced by Giorgio Vasari’s workshop. Historian and collector Alessandro Campi, who discovered the painting on an e‑commerce site, has brought the work back to Italy where it can be added to the 5 other known portraits of the author of The Prince – the most famous of which is exhibited at Florence’s Palazzo Vecchio.

The canvas, heavily deteriorated, was returned to its original colors following careful restoration. The restoration work has spotlighted the authenticity and antiquity of the work – an original 16th-century painting – as is demonstrated by the analyses carried out on the wood and pigments.

Who painted Machiavelli’s face in the typical style of 16th-century studio portraiture? And to exactly what period can this portrait be attributed? The answers to these questions have been given by the art historian Strinati, a Caravaggio scholar, considered one of the greatest experts, and not only in Italy, of 16th-century art.

His idea is that this is a painting from the workshop of Giorgio Vasari. Strinati pairs a name and a rather precise date with the work: the probable date of composition fluctuates between 1546 and 1547 and the hand that held the brush, according to Strinati, could be that of “a young Spaniard destined for a brilliant future career between Rome and Naples, namely Pedro Rubiales, known in Italy as Roviale Spagnolo.”

This attributed date makes the painting discovered in the United States the oldest know portrait of Niccolo Machiavelli and leaves open the possibility that this portrait – because it was made ​​before the ecclesiastical condemnation of Machiavelli’s works – portrays the most natural and normal features: most probably those of the Florentine when he was alive.

Immediately after the official presentation, the painting went on display for the first time. It can be seen in Umbria’s capital, Perugia, from October 31st of 2014 through January 25th of 2015 as part of the exhibit entitled “Machiavelli e il mestiere delle armi. Guerra, arti e potere nell’Umbria del Rinascimento” (Machiavelli and the profession of arms. War, the arts and power in Renaissance Umbria) presented by the Cassa di Risparmio di Perugia Foundation. Afterwards, it will be exhibited abroad: in fact, there are already several foreign museums that have requested the loan of Machiavelli’s rediscovered portrait.