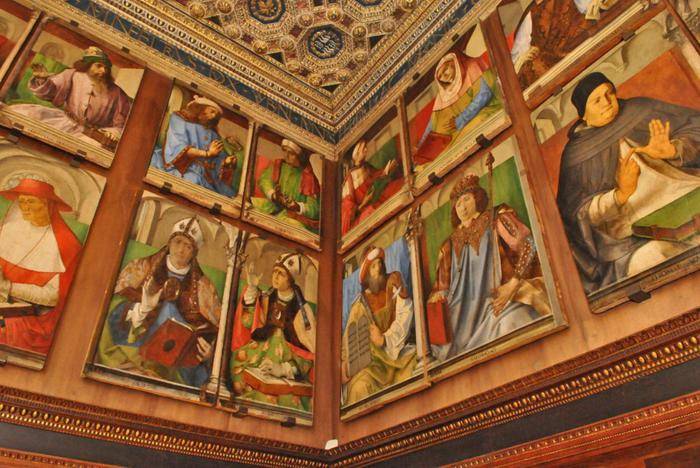 In Urbino, the “Studiolo” (or small study) of Duke Federico da Montefeltro has been reconstructed as it was in 1476. It is now showcasing twenty-eight portraits of famous men, scientists, poets, prophets and popes – fourteen of which are on loan from the Louvre. This unprecedented exhibition will be on view until July 5, 2015 and open to the public as one of the impressive events that are part of EXPO 2015.

For the first time in four centuries the ‘nerve center’ of one of the best-known protagonists of the Renaissance brings to light the underpinnings of a power in which “culture, art and politics come together in vibrant union that is of great relevance today.” “It seemed like an impossible exhibition,” observed art historian Carlo Bertelli, co-curator together with Maria Rosaria Valazzi and Alessandro Marchi, “and instead the Louvre immediately agreed to lend the fourteen panels, which will return to France accompanied by the multimedia presentation designed for the exhibition in Urbino.”

Each of the twenty-eight portraits by Joos van Wassenhove and Pedro de Berruguete – from Homer and Seneca to Federico’s tutor, Vittorino da Feltre, to Pope Sixtus IV della Rovere, who presented the duchy to a man who was up until then only a “condottiero” (or military leader) – was subjected to scientific analysis that brings to light new aspects and references to other works, explained in multilingual multimedia panels.

The “Studiolo” also makes use of a new lighting that restores the magnificent wooden intarsia decorations to their original splendor. These decorative inlays feature images such as musical instruments and books; they are also part of the mnemonic and meditative techniques that linked Federico’s library to this space for reflection and to the city in the form of a palace that was the Urbino described by Baldassare Castiglione.

Promoted by the “Soprintendenza dei Beni artistici e storici” (Superintendence of Artistic and Historical Heritage), and financed by the Marches Region. “Lo studiolo del Duca, il ritorno degli Uomini Illustri alla Corte di Urbino” (The Duke’s Study, the return of the Illustrious Men to the Court of Urbino” is one of the projects of the Marches Cultural Development District.